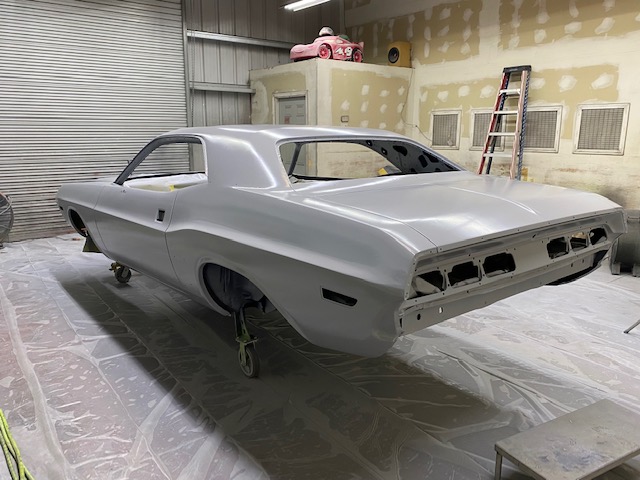 This is a rare 1971 Dodge Challenger Sun Roof car. Not very many of these made. We are performing a full restoration on this car.

Spring 2020
Car was torn down and heading off to the blaster.

All of the body work is now complete and the car is in primer.

Paint has begun and we are prepping the car for undercoating. 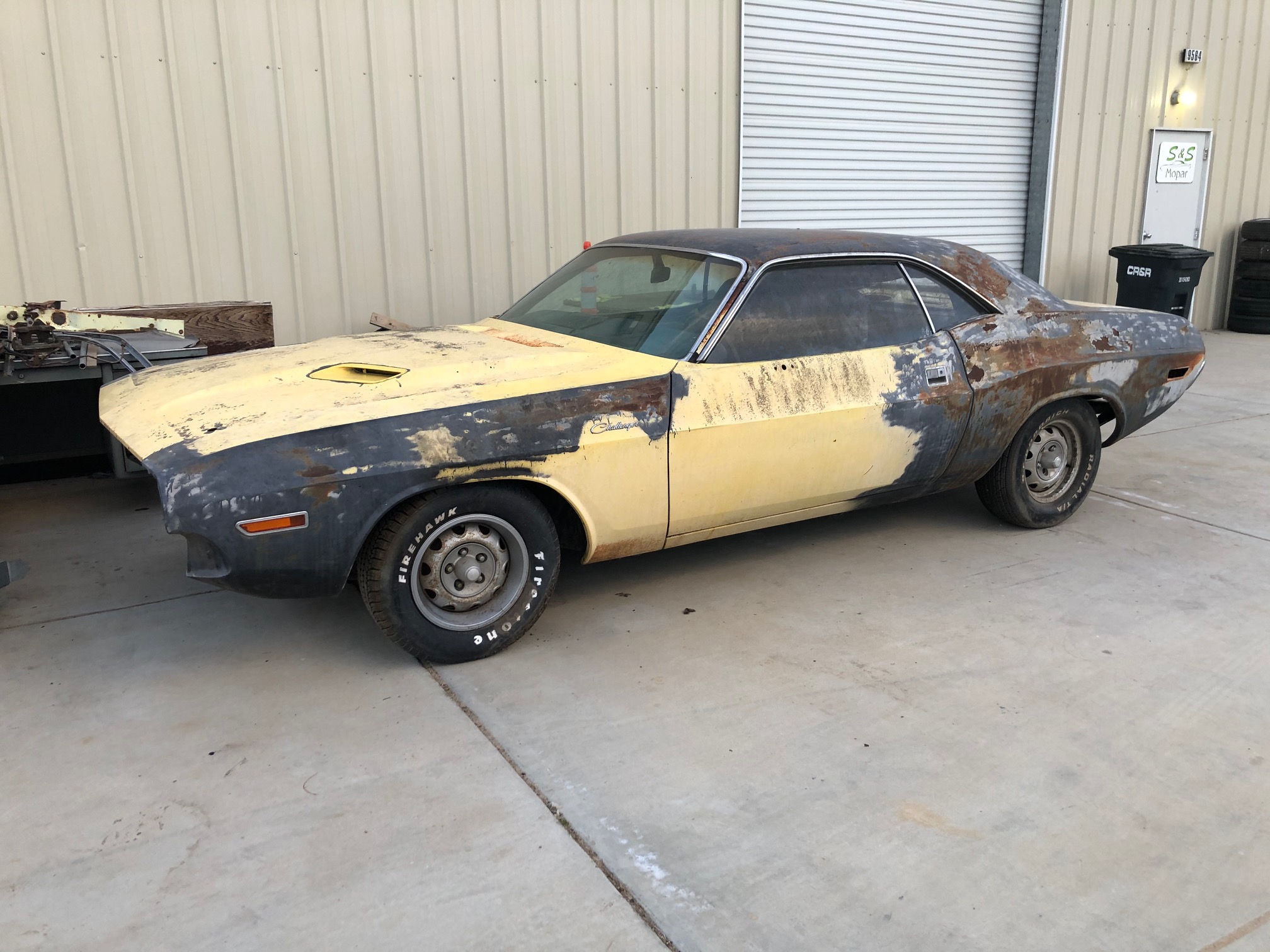 This is an extremely rare find and we are now offering it up for sale. Here are the details

This car has been sitting in covered storage since 1999. It has the matching motor and trans and rear end. It also includes the original power steering with cooler and has manual 11×3 drum brakes. The skid plate and torque boxes from the factory original 14″ rally wheels are still on the car. This is a super solid California car that has never been out of SoCal. Less than 1000 of these were built, FAR less with this high impact color paint and upgraded interior combo.

All glass is in excellent condition, even the front windshield. Windows go up and down almost like new. The gauges and steering wheel are in excellent condition and very clean. The trunk pan is solid. There is just so much going right for this car. Some missing parts include the console and air cleaner and the radiator is an after market radiator. The rear quarters were also redone, but done nice. Very little rust or rot in the car. 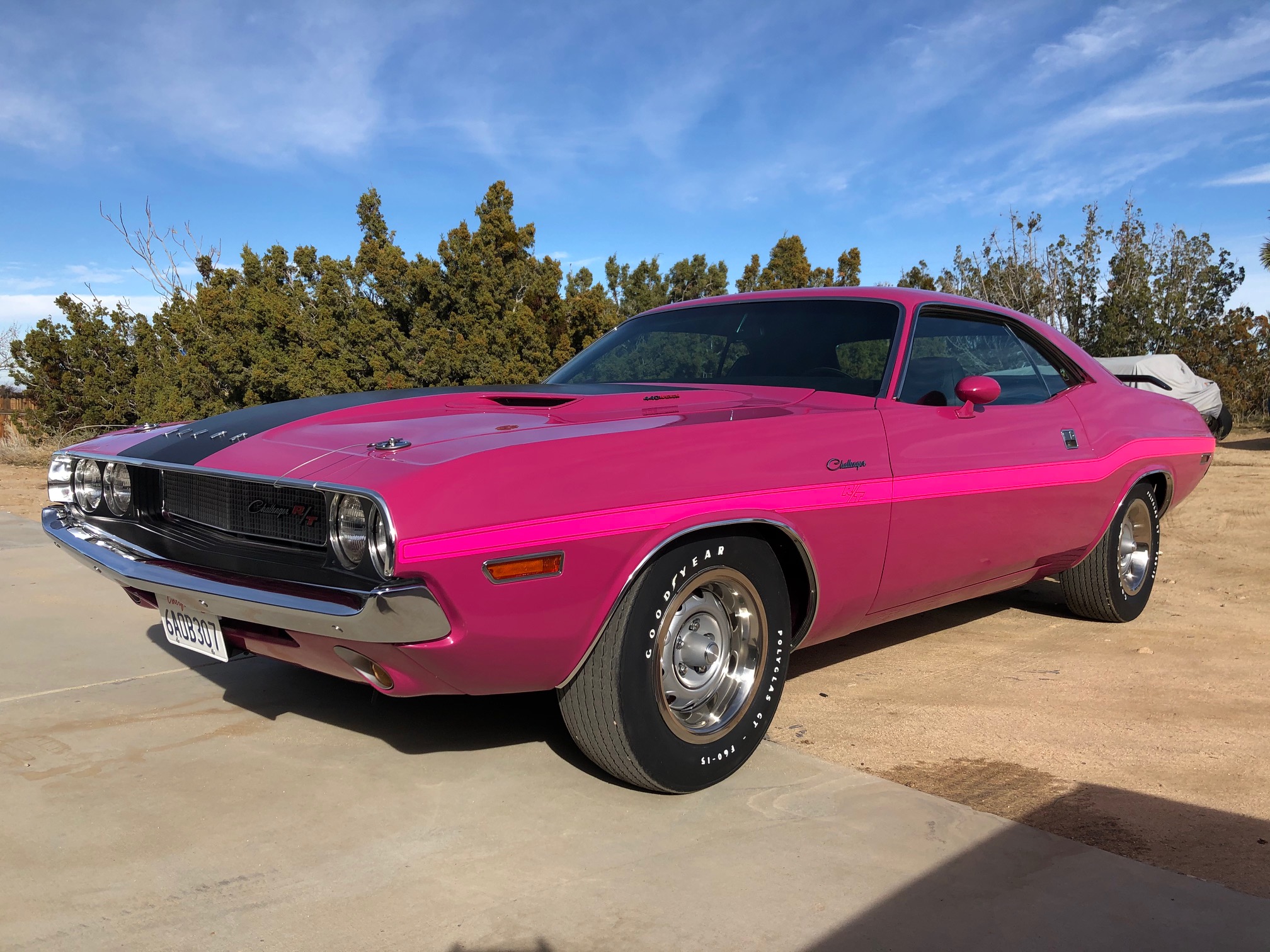 This is a factory original 1970 Dodge Challenger RT 440 Magnum car…but what makes it really unique is the color combination!

The car is a factory FM3 Panther Pink car with Hot Magenta stripe and blacked out hood. Yes, it was originally ordered that way and we have the original build sheet! There were only 2 Pink/Pink 440 4-barrel cars produced from Chrysler. So it is a one of two built car. It has been off the road since the late 70’s and has only accumulated 44k original miles. Unfortunately it was side swiped on the passenger side (fixed now) and then left for dead in the original owners yard. The motor and trans were pulled and the car was sold to the 2nd owner in Michigan. Restoration was started in the 80’s, but only a small amount was completed. Mostly it sat around in the garage with other pink cars.

Mopar Collectors guide did an article on this car back in the 90’s, but still, nothing more was done. We purchased the car in the early 2000’s and began finding parts and working on the restoration. Because we took our time, the car has tons of original parts. The interior is mostly original including seat covers, door panels and the dash pad. The carpet and headliner are new.

The motor has the correct dates F440-HP along with the transmission. Most of the parts we used are OEM or NOS. The rear wing was added by the 2nd owner and we left it in place. The car is on the last leg of restoration and is getting close to being finished and it will be for sale when completed.

Contact us if you are interested in the completed car. One of the rarest challengers on the planet, and documented.

22 Oct 2019 – Update! Its a big day for the pink Challenger. We install the motor and front end all as one unit, just like at the factory.

Feb 2020 – After final buffing, this car is done and is amazing! If you would like to come see it, it will be at Muscle Cars at the Strip 2020. March of this year. Certainly a car you will probably never see another one like. 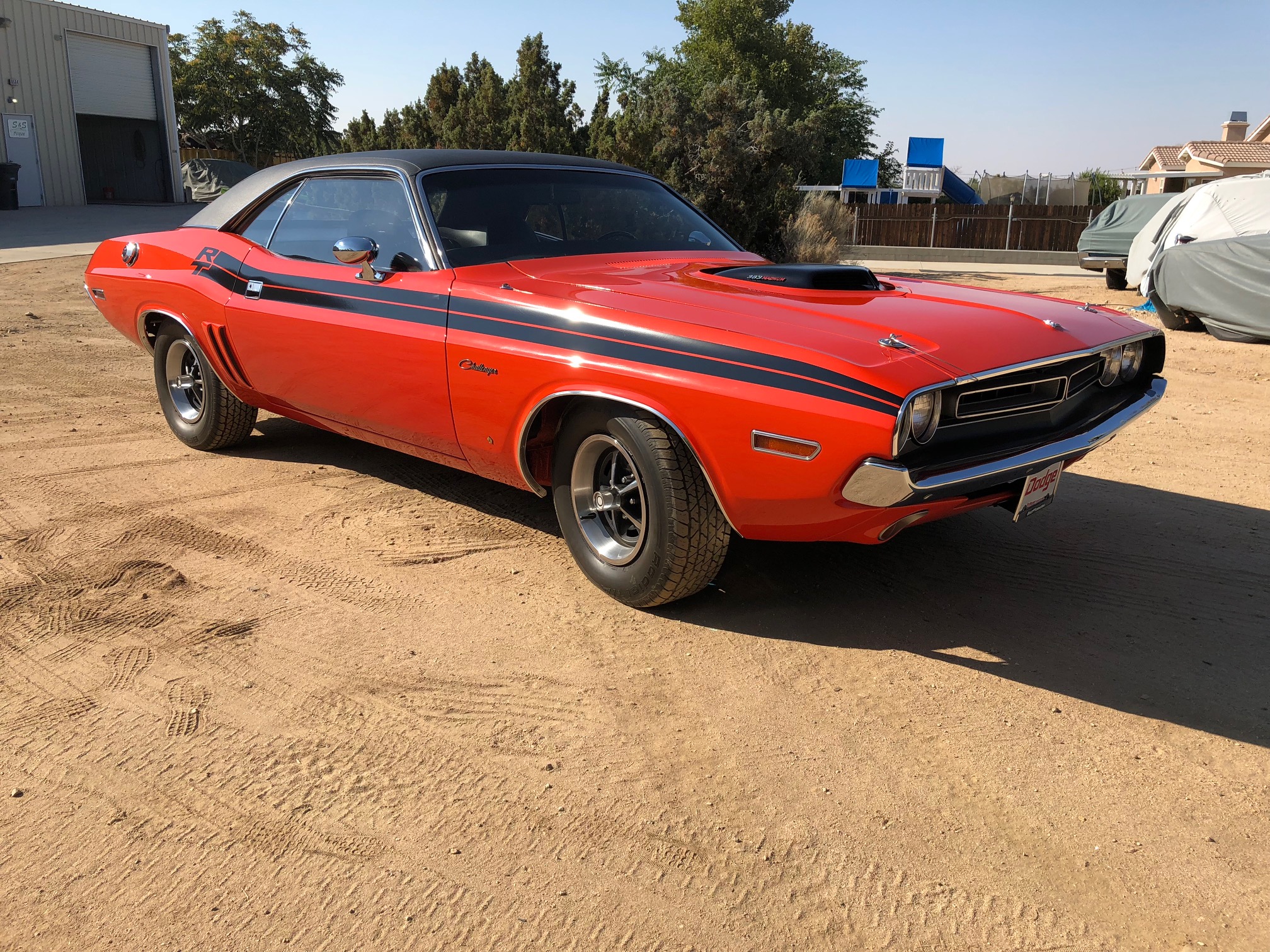 Here is an original 1971 Dodge Challenger R/T that is an original California car as well. This car was owned and built by Ken Funk for his daughter. Most all of the restoration work was done around 10 years ago. It is a numbers matching motor and transmission and includes the original build sheet. Many of the bolt-on motor parts are all part number and date coded correct for the car. The body has just over 100k miles and is very solid. It retains all of its original sheet metal including the trunk pan. The only addition has been the shaker hood. Besides the shaker hood, the car was built back to build sheet specs with the original color and options.

The motor, however, is not the stock 8:1 compression motor that would have come in 1971. It has been freshened up very nicely and hit the dyno at a respectable 360hp. Coupled with the 727 automatic and 3:55 possi gears in the rear, it is a very strong street running car that has no problem smoking the tires. It is an excellent running and driving car that does have power steering and power disk brakes for good stopping as well.

The interior is a mix of both original and new. The seat covers are new from Legendary. The door panels and dash are still the original ones that came with the car. The dash has a couple very minor cracks but it was too nice to change it out. The gauges all work and have been freshened up by Redline gauges. The engine compartment is very original and correct as well with the correct radiator, alternator, starter, and bolt on items. The Shaker hood was added and is one of the first generation AMD. The shaker bubble and parts are the very first gen Gregory bubbles and base with NOS grills. It is hard to beat the look of a shaker on an E body.

The trunk is finished off with an OEM polyglass tire for the spare along with a complete jack system. Its wheels are still OEM correct to the car and the underside is still original and has not been painted or detailed, just cleaned very nice and left factory stock to show its authenticity. A correct exhaust system from accurate exhaust was installed including mufflers and resonators along with tips.

This is a very correct and clean driving car. Very reliable and turns heads where ever it goes.

This 1971 Challenger convertible was a major undertaking as there was severe rust and body damage that had to be repaired. Just take a look at the pictures below to see the extent of what we had to do.